What About Infrastructure? Part III 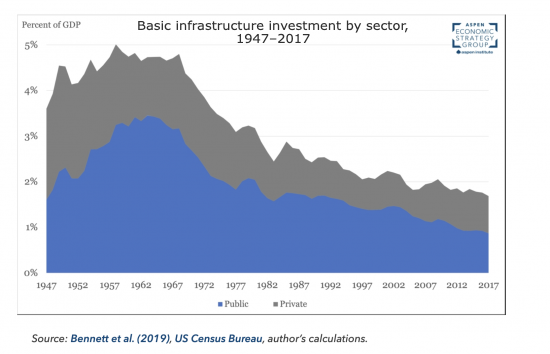 Are these related? Well, certainly the declining state of US infrastructure is directly related to the lower overall investments in it. As for the wages, there are many explanations offered as to why the “great decoupling” of the overall economic growth and wage growth started a few decades ago. I plan to tackle that topic in later posts but we can assume that a slow growth in productivity of the workers is at least partially responsible for slower wage growth. And, since we know infrastructure investments drive productivity growth, then there is a relationship between the two. 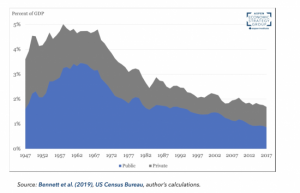 In addition to lower overall spending on infrastructure (Figure 1,) it also looks like that lower expenditure is buying less than it used to. Figure 2 shows that the cost of highway per mile has increased dramatically. As a matter of fact, it is increasingly clear that such costs in US are much higher than its peer countries such as UK, France, Germany, and other OECD countries. This is obviously quite disturbing because it means that even if we start investing at historic levels, that money will not go as far.  Once again, there are many explanations offered for this but it appears that there is tons of profiteering from government spending and not enough controls in place to prevent this. Tax dollars going into the government is a great way for many companies to make money and charge exorbitant amounts that would never fly in the private sector, but government actors are spending other people’s money and do not have to worry about every dime the way a business owner does. 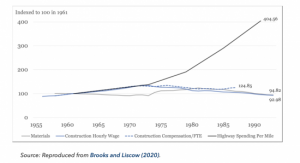 So, restoring our funding to historic levels will be very important but we will need to stop this graft! Given the decreasing appetite for making public investments and the inability of those that favor it to sway public opinion, every dollar invested needs to be stretched as far as possible. Remember, to restore the investment levels to historic levels, that revenue has to be raised through taxes or money has to be re-allocated from other categories that are being funded now (Defense, anyone?) to infrastructure. This is extremely hard on both fronts. Since that charismatic leader of the 1980’s America, Ronald Reagan, popularized the ideas that government is not the solution but the problem, and that lower taxes are always better than higher taxes, it has been difficult to convince people that paying a little more in taxes to make these long-term investments is a good idea. And, since every sector wants its share of the government dollars and those who have successfully secured those dollars such as the Defense industry, will not let go of any of their honey pot, it will not be easy to reallocate those dollars to infrastructure.

Fortunately, this year was had a breakthrough in this regard and a large infrastructure package was passed. Next, let’s take a look at what is in it, how it was funded, and is it enough?