US Economic Resurgence and Implications For the International Competition

Something amazing happened last year: US had a higher economic growth rate than China! This has not happened in decades. US being a large, fully developed economy with a high GDP/Capita is expected to grow 2-3% per year. However, last year, the US economy grew at 5.7%, highest growth rate in decades. This happened while many other developed economics continued to struggle because of the pandemic, the delta wave, the omicron, etc. So, how did it happen?

For one, US passed a large stimulus plan in the first quarter of last year that helped the economy through the delta wave in the second and third quarters. Also, US passed a large infrastructure bill that will ultimately result in improved productivity and wage growth. The passage means that in the short-term, it resulted in optimism in the private sector and increased investments that would prepare companies to reap the benefits of the coming public sector investments.

All of this adds up to a point that I have tried to emphasize for some time in my blog posts: there is no inevitability to China passing US in terms of its overall size of the economy. Early in the Covid-19 crisis, when China managed to control infections and maintain growth even as the U.S. suffered hundreds of thousands of deaths and a crunching recession, many were inclined to think that China’s ascendence to the largest economy in the world was inevitable. More recently, an unexpectedly fast U.S. recovery has illustrated just how much uncertainty remains around the timing of the transition—and even whether it will happen at all.

China has major ticking time bombs. A major debt problem (exacerbated by the pandemic!,) a collapsing real estate sector, overcapacity in critical sectors, tariffs that are impeding access to international markets and key technologies, and worst of all, a suffocating surveillance state that is bearing down on the private sector.

The nightmare scenario for Xi is that China could follow the same trajectory as Japan, also touted as a potential challenger to the U.S. before it crashed three decades ago. A combination of reform failure, international isolation and financial crisis could halt China before it reaches the top. 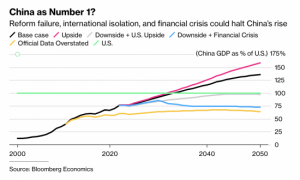 Over the long haul, three factors determine an economy’s growth rate. The first is the size of the workforce. The second is the capital stock—everything from factories to transport infrastructure to communication networks. Finally there’s productivity, or how effectively those first two can be combined. In all areas, China faces headwinds that can impact its continued growth

We will examine how China is doing in those areas in our next post.