The Emerging Landscape of International Competition I 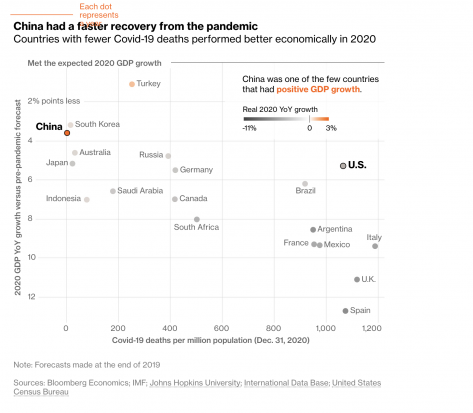 Last year saw several milestones signifying China’s rising global influence: it attracted more foreign investment than the U.S. for the first time and the number of Chinese companies on Fortune’s list of the world’s largest overtook the U.S. And for all the talk of supply-chain diversification amid the trade war, China’s share of global trade actually increased at a record pace as the world snapped up its masks, medical equipment and work-from-home gear.

All of this can be very concerning to those who root for the West to maintain its place in the pantheon of the world economy and international influence. After-all, what will a world look like with China being the largest economy and the most influential force in the realms of finance, science, media, etc? Would that be a world of cooperation for a common good? Or, a world where the dominant country acts in a predatory and belligerent manner toward everyone else? The rule written to benefit them at the expense of everyone else?

For this reality to come to fruition, China will need to continue its economic miracle. That miracle was based on market-reforms, opening up the economy to private ownership, and allowing some competition between companies. Although the central government ultimately controlled this competition and the level of investments and credit flow, these reforms were meaningful enough to produce massive economic growth over decades. The resulting wealth was partly spent by the government to invest in China’s long-term growth through public sector investments in education, research and development, and infrastructure. The result is the world’s second largest economy and a true rival to the West.

Lately, there is increasing evidence that the Communist party is ready to be more involved with the economy and exert a greater influence on who wins, who loses, where investment dollars go, which business transactions should be allowed, and who gets to keep certain amount of wealth. It has long been predicted that we would get to this point. Many have long been predicting that political repression in its one-party system will smother economic vibrancy. But China has a long track-record of proving its detractors wrong. Xi has cracked down on almost every form of political dissent, yet the economy has doubled in size over the past decade.

Indeed, some aspects of China’s economy that are often highlighted as weaknesses turned out to be strengths in a pandemic: state-control of the financial system allowed companies to avoid defaults, state-owned companies could be ordered not to lay-off workers and once the virus was under control, a surge in state-directed investment got the economy moving again.

However, in spite of all of this, as Bloomberg Businessweek put it in a recent article, the race for economic dominance is far from over. Japan was touted by some in the late 1980s  as destined to overtake the U.S., but that never happened. Indeed, Biden’s $1.9 trillion stimulus put the U.S. on a strong trajectory in 2021 and his major infrastructure package, will result in a major boost to U.S. growth potential and could keep China in second place for longer (or, for good!)