Setting the Stage for the 21st Century Dominance Part II 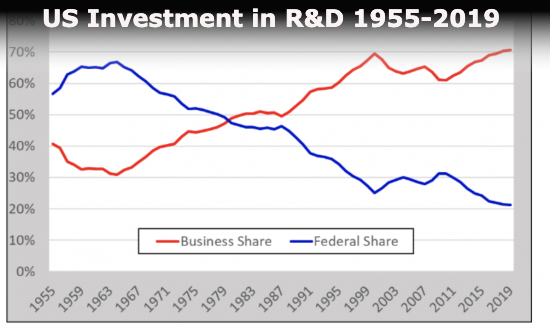 In the last blog post, we discussed the emerging competition between the established superpower, U.S., and the emerging superpower, China.  Many are speculating that in the coming years China will become the largest economy in the world and consequently more influential than U.S. in geopolitics. I raised the point that if U.S. makes the kinds of choices that accelerate its economic growth and tighten its grip on the international institutions, china will not just automatically surpass U.S. in wealth and influence.

So, what are those choices? One of the things that made U.S. such a dominant economic power was its commitment to science and technology and its appetite to invest in the types of institutions that conduct high quality research and development (R&D.) What are these institutions? Our world-class Universities that are engaged in intense research, various public institutions such as the NIH, National Science foundation, The Defense Department, and many more. Most of the impressive advances of the last century have come out of the ongoing painstaking research in these institutions. This type of research happens years before any of us know about it or sometimes decades before any commercial products that improve our lives make their way to the market.

I’ve been involved in this type of research. It is trial and error again and again and again until something behaves as envisioned. Many of the theories that the researchers start out with never materialize. For every microchip, the internet, GPS, etc there are hundreds and thousands of ideas that don’t pay off. Does that mean that we’re wasting money by funding different types of research going on across many institutions? Absolutely not!!  Until someone comes up with a better way for us to find the great inventions of tomorrow, we have to continue funding many promising ideas to find a few great inventions that result  in progress. 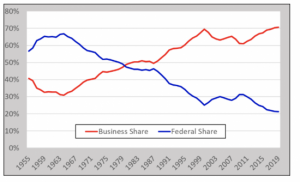 Our ongoing commitment to public and private R&D is paramount for our long-term success. Unfortunately, in the last few decades, our investment in public sector R&D as a share of the GDP has dropped significantly (Figure.) Although the private sector R&D has increased at the same time, this is overall bad news. Why? Because it’s the public sector R&D that pursues multi-decade projects that result in transformational technologies such as the internet. The private sector R&D dollars go to  shorter term projects that help their individual business models but are protected by patents and trade secrets and do not have the same societal impact that public research R&D does. Also, the private investors have much lower patience and significantly shorter time horizons for their investments to pay off. As such, major foundational research that does not result in short- or medium-term commercial success is rarely funded in the private sector.

That is why getting back to our historical level of funding (before the slide in the recent decades) for basic R&D is a critical first step toward ensuring that US remains the most influential nation in the world. At the same time that U.S. has lowered its level of funding for public sector R&D, China has been pursuing aggressive industrial policy and investing heavily to catch up in critical areas.