Given the range of pressing issues in the news these days, there doesn’t seem to be enough bandwidth for much else. Geopolitical tensions from China to Ukraine, ongoing pandemic, and a range of economic issues, top amongst them inflation. Even though US economic growth has been very robust in the past year and unemployment is down to 3.6%, most people seem to view the current economic conditions as poor. Inflation is largely responsible for that but anxieties stemming from the ongoing pandemic and the war in Ukraine makes people feel more negative about the economy than they should. Consider the fact that wages are sharply increasing across the socioeconomic spectrum, something we have been waiting and working toward for a long time. However, if inflation is eroding much or all of those gains, then people will not view it as positively as they should.

One of my main concerns these days is losing sight of the key long-term economic investments we need to make to ensure long-term prosperity. I see that as the real price of the current issues. We have a tendency to focus on the urgent issues too much, at the expense of the important issues. In order to make sure our short-term issues don’t become long-term, we can take proactive action now.  What are those issues and actions? Well, if you invest in infrastructure, you increase worker’s productivity. If workers are more productive, they earn higher wages and higher wages due to increased productivity does not result in inflation.

Another example is investing in basic R&D, usually done in public institutions and universities.  Although private sector investments are very important in economic growth, they mostly focus on commercialization of existing technologies or finding new commercial applications for them. However, creating entirely new industries, such as e-commerce required decades of research in public institutions, including the pentagon. This research involves lots of trial and error and many dead-ends. In the private sector, investors require return on their investments and if an investment does not show promise in short- or medium-term, they will pull the plug on it. That’s why public sector investments with longer-term time horizons are critical to ensure we continue to create transformational technologies that become the foundation for whole new industries.

Currently, there is a bill in congress, dubbed the U.S. Innovation and Competition Act, that boosts investment in basic R&D in US. Different versions of it have passed the House and the Senate. This bill would boost U.S. investment in high-tech research by $250B. It is currently stalled in Congress. Initially, the main reason was the different versions passed and the need for reconciliation of those versions before a final vote in both chambers and a signature by president Biden. While the bill initially passed the Senate with bipartisan support, the House version added some of the priorities of the progressives, such as climate change and income inequality issues. This has threatened the bipartisan support for it. 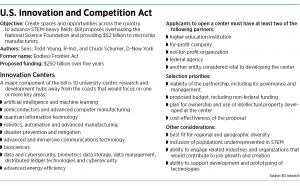 The Senate package would authorize about $190 billion in spending to strengthen U.S. advanced technologies to better compete globally, according to a Congressional Budget Office analysis, and allocate about $52 billion for encouraging more semiconductor production in the U.S.  Some, including Commerce Secretary Raimondo, contend that this bill would help with long-term inflation issues.  Secretary Raimondo has said that spending would help alleviate computer chip shortages that have contributed to tight supplies—and higher prices—for cars, appliances, electronic devices and other consumer items.

This is an example of long-term investments that we need to stay on top of in spite of the noisy news cycle these days!! 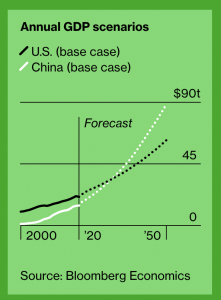 Read More »
PrevPreviousIs A Recession Around The Corner?